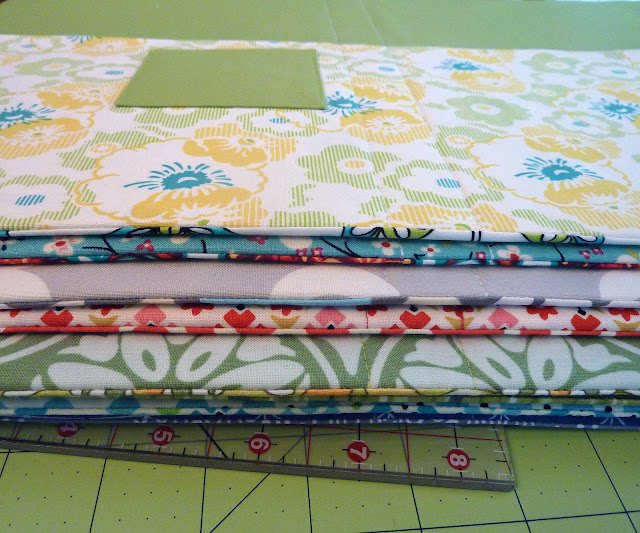 I almost had this ready to post yesterday, but my Freshman came home from school and asked if we could go to Macy's for some nice clothes.

The kid lives in track pants or jeans and sweatshirts. And, a blizzard is supposed to be coming in a couple hours.

He says he needs it for Saturday. For a dance.

The Winter Formal (that's what they call Turn-about these days)?! In two Days?!

Well, at least he didn't wait until Friday afternoon to mention this!
And Men's Wearhouse rocks. 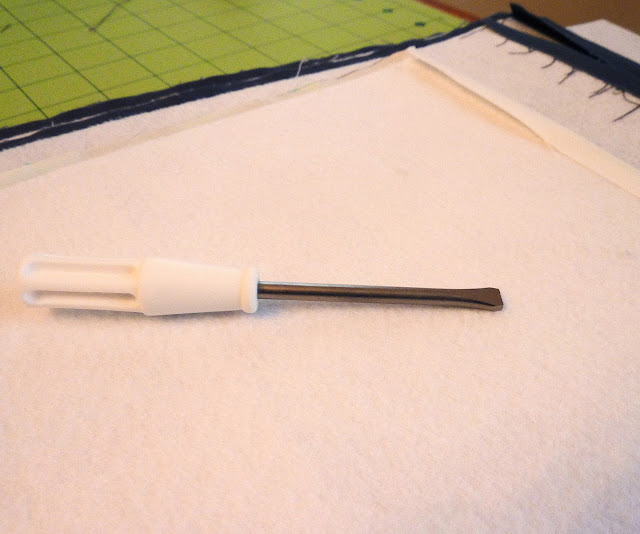 Here's my best discovery while making the 18 portfolios. I used my sewing machine's little screw driver to push out the turned corners. The square, but blunt tip did a wonderful job of pushing them out without poking through the stitches or fabric.

I took a bunch of pictures and am getting ready to deliver everything to the school.

Turn-about and/or portfolio pictures to come after this weekend.

I've been in the midst of lanyards and fabric stacks. 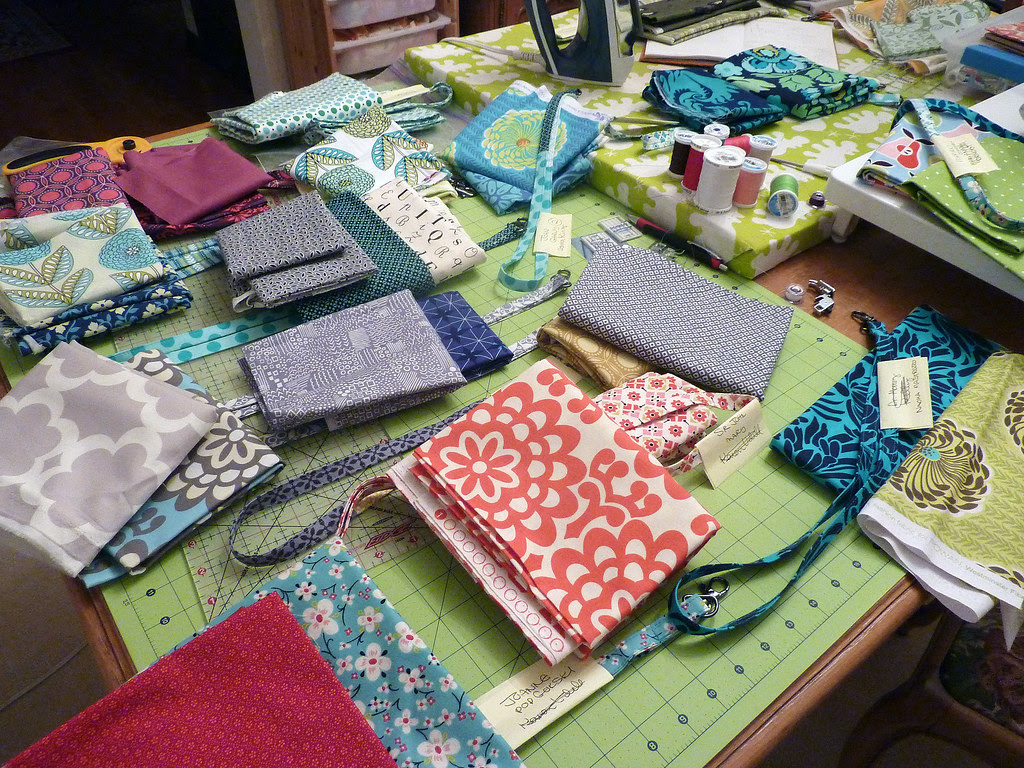 I'm making 18 sets of lanyards and matching folder-things for Becket's school. So out came a bunch of fabric stacks - super fun.

With it a semi-holiday today, I don't have much running around to do. I'm going to try to get most of this finished up. Then I can take some pictures of the folder thing I created - pretty proud of it, as it came out as I planned from the first draft.
Posted by Angela Nash at 10:01 AM 6 comments:

It's my birthday today - so I thought I should celebrate by finally posting pictures of three more quilts I finished up late last fall. 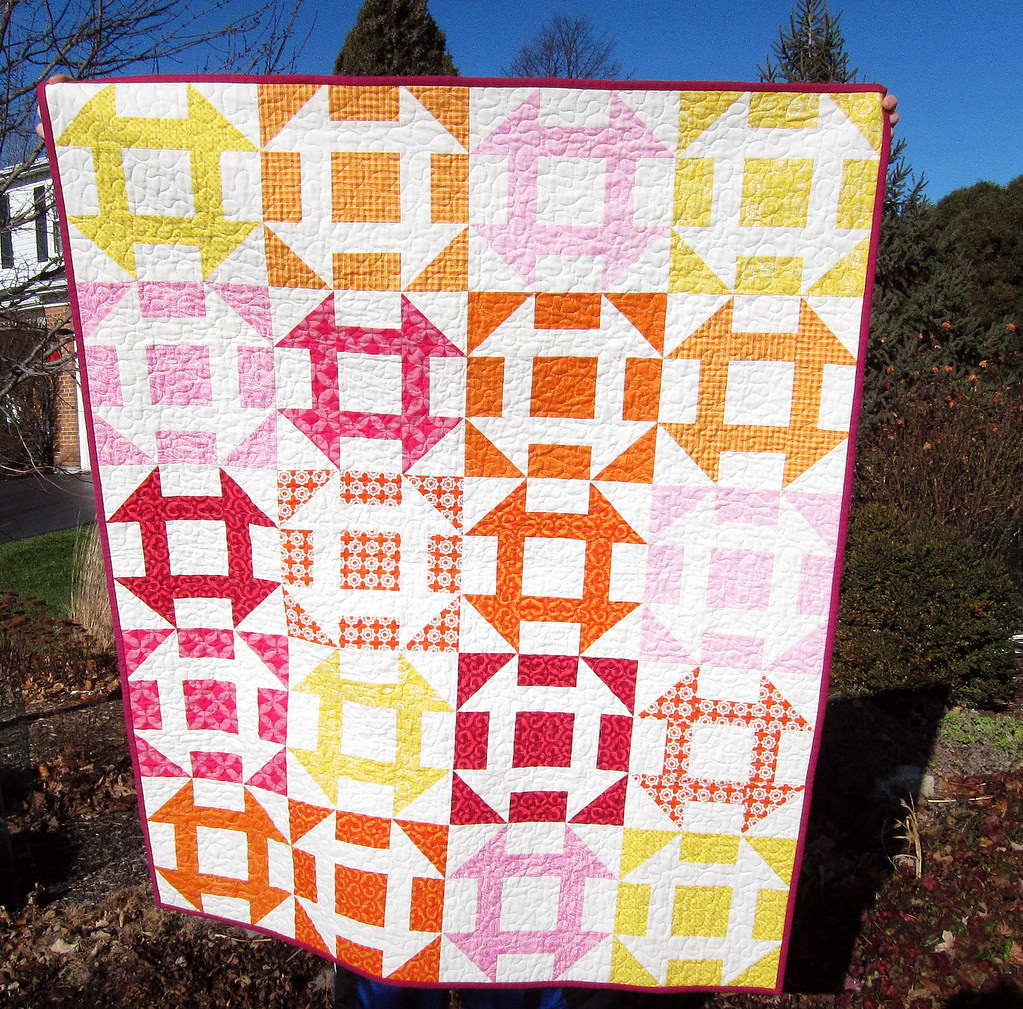 This is the Modern Churn Dash from Amy, over at Diary of a Quilter. I was interested in her method that used the fabrics so efficiently and her pattern is great! 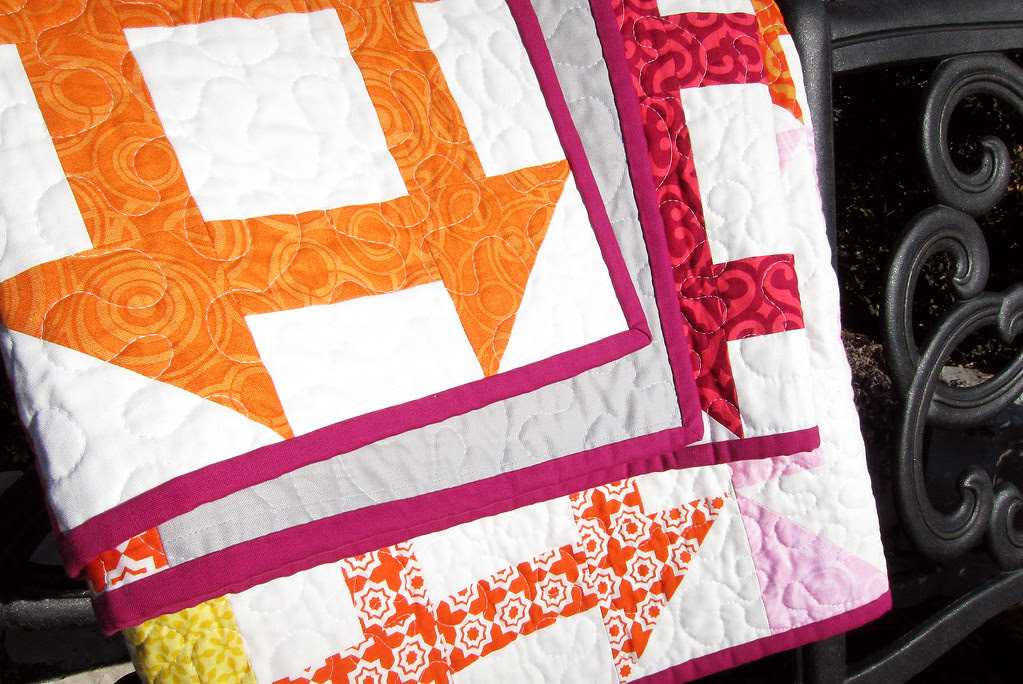 I have been really interested in the effect of reversing the conventional negative space. I love Amy's alternating of the negative space with these blocks. 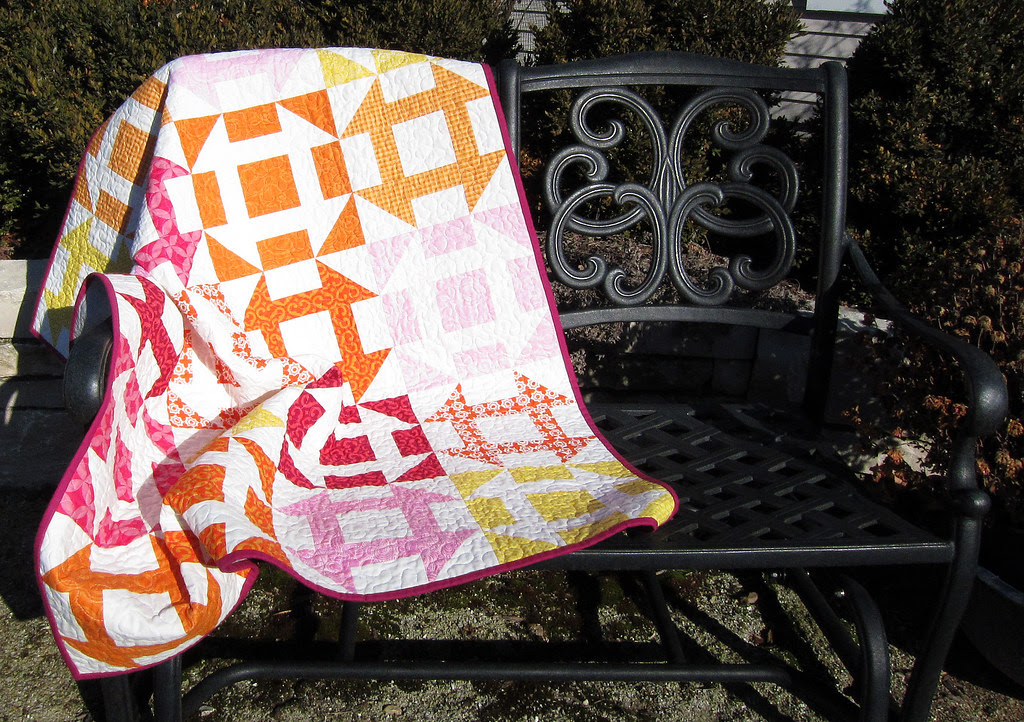 I was in the midst of my first fabric diet/quilt challenge with Leigh, so I was running low on neutral solids. Using gray on the back turned out so well! 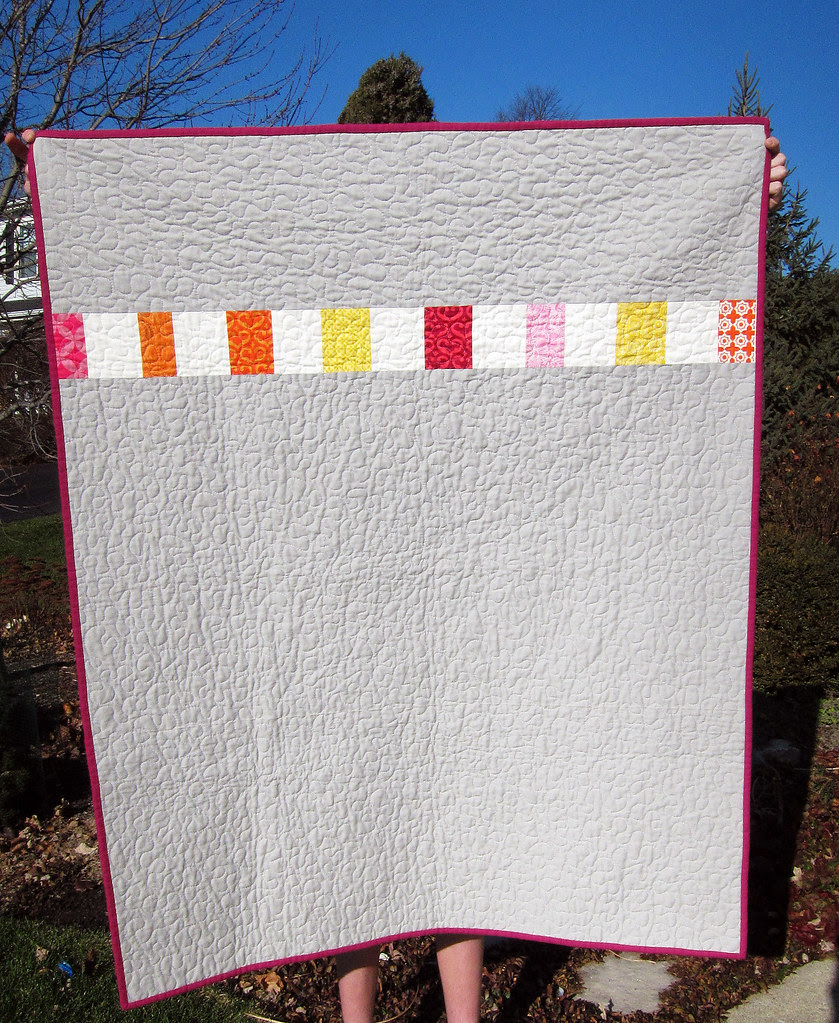 This next one was simply a collection of many of my favorite blues and greens. When you look at my fabric stash, they are leaning towers, way higher than anything else!

(don't tell them, but I've really started to love the pink/orange/yellow combination) 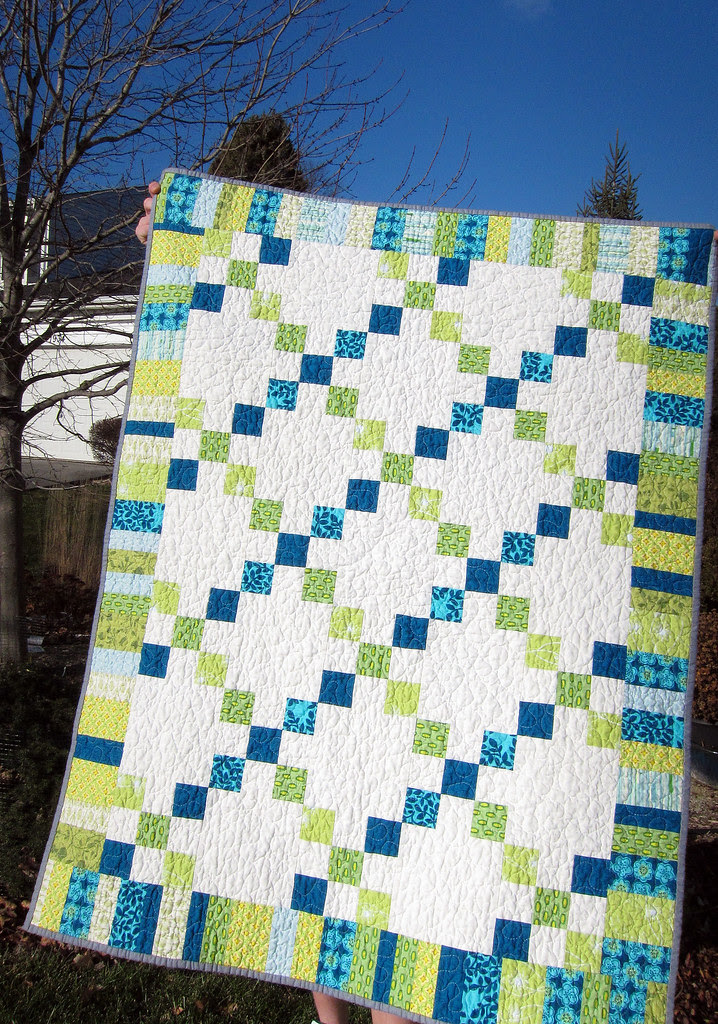 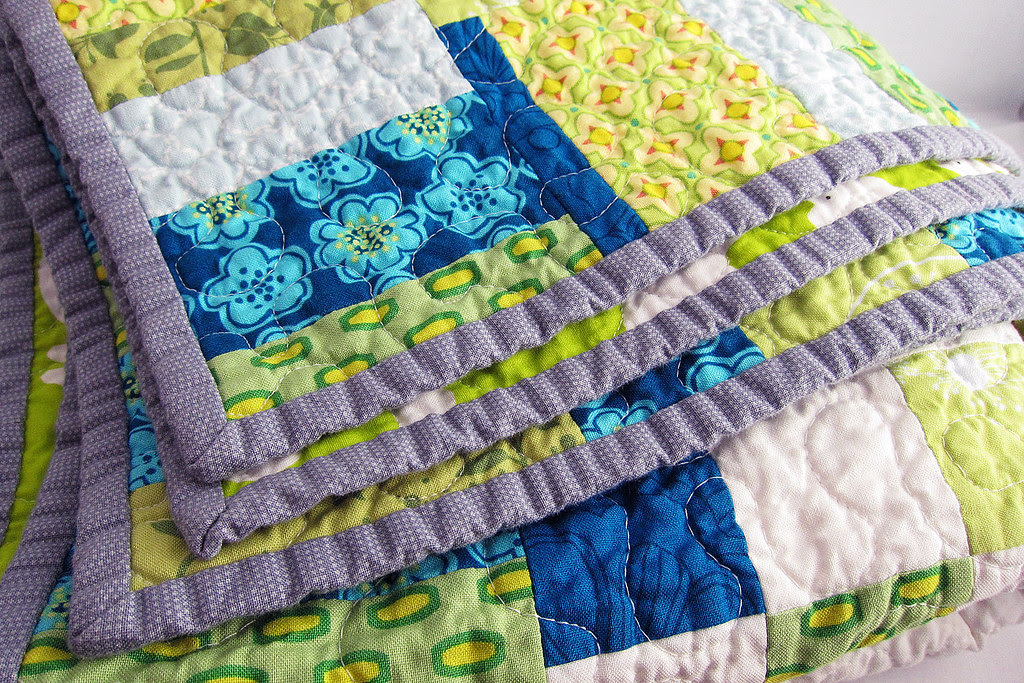 Finally, red and blue in fun 'There's a Square in There' improvish blocks. This was just a plain ol' fun quilt to make! 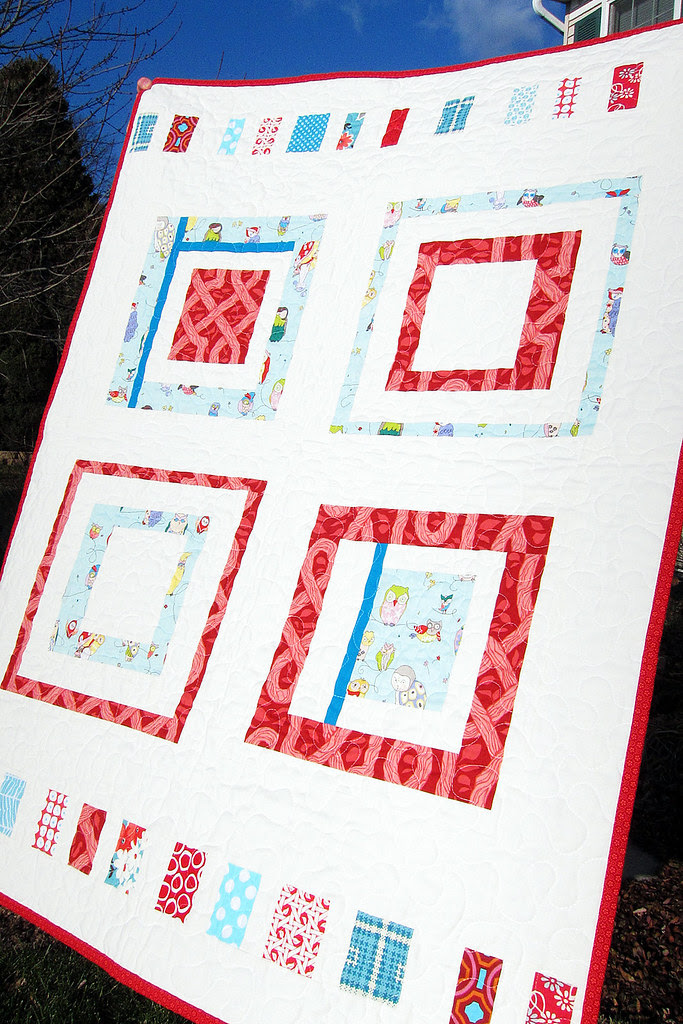 Now, off to ruin my healthy eating/exercise plan a little more. I bought myself a small chocolate ganache cake at Trader Joe's today. We aren't having my official birthday party until Saturday with my Mom and Dad. So I had to get a treat for today :)

Thank you for both the comments of support and also disagreement to my last post.  I enjoyed the email conversations with both sides. 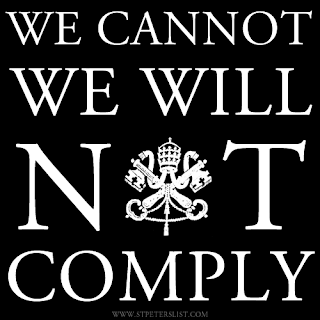 What do you believe in - at your core?

Besides free fabric for all (because that would just be awesome). 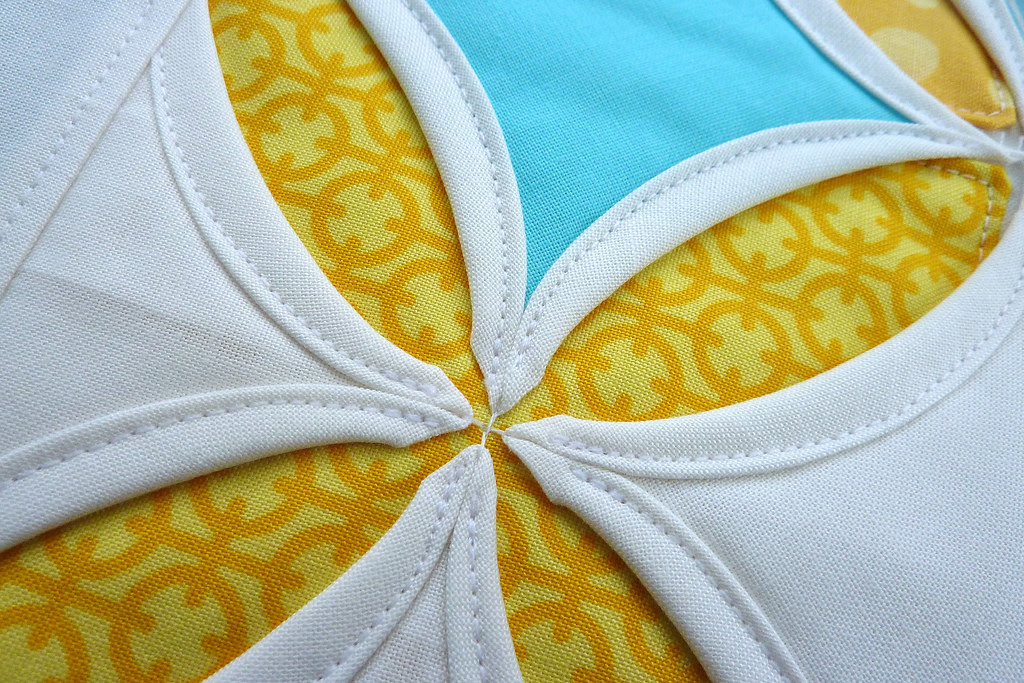 "We pray, no longer silently but as a great number.
We enlighten each other.
We carry each other along.
We depend on our faith in Jesus."

Have you heard? Perhaps you have, and either heartily agree with the HHS mandate or are neutral. You can not afford to be. What are your core beliefs? And can you trust that you will be permitted to hold onto them?

Most of you aren't one of my FB friends that has been flooded with blog links and comments the last 3 weeks.  So here's an entertaining summary of this crazy, just as it was starting.
An Open Letter to President Barack Obama Concerning Recent Tyranny (With Pictures!)

The Obama administration has just told the Catholics of the United States, “To Hell with you!”  Bishop David Zubik of the Diocese of Pittsburgh.

The media would like to make this into a Women's Health issue - and pit it against a bunch of old, out of touch Catholic bishops.

This is about a central teaching of the Catholic church and Obama's demand that we figure out how to violate our consciences within the next year.

"Our country is unique in the world because it was established on the basis of an idea: that we are all endowed by our creator with certain unalienable rights -- in other words, rights that are conferred not by a king or a president or a Congress, but by the Creator himself. The state protects these rights, but it doesn't grant them," McConnell said.

"Our founders believed so strongly that the government should neither establish a religion nor prevent its free exercise that they listed it as the very first item in the Bill of Rights,"

A slightly similar scenario?  There are so many homeless in America, and Obama has decided that it is a right that they are housed inside every night.  Each public building and church must be open to area homeless each night for shelter.  The Catholic church does this in our area, so that seems good to me.  But the Mormon leaders protest that they must be excluded - their big, beautiful temples are sacred to them.  OK - says Obama - we'll make a slight change.  Don't worry about opening your temple doors, we will post an official at each and open the doors for you.  You don't have to be around, see - all good.  Not exactly the same, but just as nuts!  It's the idea of the government saying your religious beliefs are null, suck it up we really don't care.

Because I'm a bit obsessive and read everything, I happened to find The United States Commission on International Religious Freedom, and their report on Laos in 2011.   It recommends that the US "Initiate technical assistance and human rights programs that support the goals of protecting and promoting religious freedom."

Among other issues, USCIRF is upset that Laos authorities have used threats to force people to 'abandon beliefs and practices the authorities consider “backward.” '

Perhaps we must turn the USCIRF on our current administration. Because this is exactly what they are trying to do to the Catholic Church and any other person whose beliefs are contrary to their mandate.


Critics are missing the main point. There are good reasons that your car-insurance company doesn't add $100 to your premium and then cover oil changes.

Perhaps you don't buy in to the Catholic view on birth control.  Honestly, a bunch of those who consider themselves Catholic don't either - Humanae Vitae can be hard to understand and without a doubt is contrary to the whims of society.  Regardless, we are to follow the Magisterium and work to understand it even when it is hard.  But here's a secular view from the Business Insider (full article):


Here's the thing, though: the Catholic Church is the world's biggest and oldest organization. It has buried all of the greatest empires known to man, from the Romans to the Soviets. It has establishments literally all over the world, touching every area of human endeavor. It's given us some of the world's greatest thinkers, from Saint Augustine on down to René Girard. When it does things, it usually has a good reason. Everyone has a right to disagree, but it's not that they're a bunch of crazy old white dudes who are stuck in the Middle Ages.

There isn't a single thing they can say to make me think this is truly about Women's Health.  (This one is pretty funny and on target.  The only thing they missed was how many copays women and men are going to cough up when the free pills (condoms are expensive dude! go for the free stuff) have left them vulnerable to the rampant STDs currently out there.)  In their first release, The White House actually quoted a study:


The National Business Group on Health estimated that it would cost employers 15 to 17 percent more not to provide contraceptive coverage than to provide such coverage, after accounting for both the direct medical costs of potentially unintended and unhealthy pregnancy and indirect costs such as employee absence and reduced productivity.

Perhaps employers should not hire women at all?  Evidently they are costly and irresponsible ones that want a family will have a reduced productivity.

For those that are interested, a detailed outline of the Bishops' firm commitment to rescind the HHS mandate after the insulting 'accommodation' on Friday.

We are raging mad.  There comes a time when you have to stand up and own what you believe.  And not be afraid to put it out there.