Inspired by a blueberry picking picture on another blog, I thought I'd post some of the fun we had picking berries a couple of weeks ago. (With the long drive I had been able to knit up most of the back of Trellis!)

Kenton ate more than he put into the bucket.

Becket had his first taste of blueberries. I tried picking while holding him on my hip and this is what happened.

It would have been better if I hadn't been so worried about them being a choking hazard. Not to mention he also picked green ones, leaves, and at one point was gnawing on a branch. I bit the berries in half for him to eat before we stopped for a picnic lunch that Gram had brought. After lunch Mark entertained him in the shop while I did some serious speed picking with Caleb and Kenton. When all was done we had about 40 pounds of berries for eating and freezing. Here is a sculpture Caleb made of the berries awaiting the freezer. I thought it looked like Gandalf and his army! 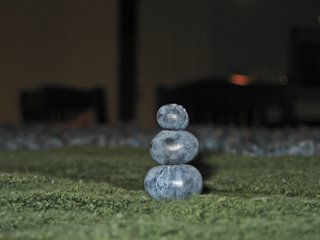 Look at those blueberry bushes! I've only ever seen "low-bush" blueberries in Newfoundland and I'm shocked by the size of a "high-bush". Wow! The things I learn from blogs....

I like your blog! And your kids are adorable too...

When I grow up (and graduate from dishcloths), I want to knit just like you. Amazing!!!!