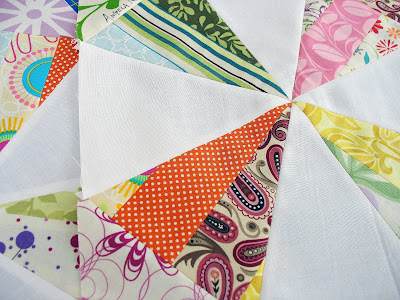 Ownage: Exclaimed loudly by teen boys when they have won some random competition or beaten a hard game level.
{It's pretty annoying, but I like it better than the last six months when everything that was really good was 'beast'. That's, like, totally annoying - gag me with a spoon. We never had lame sayings when we were teens. :) } 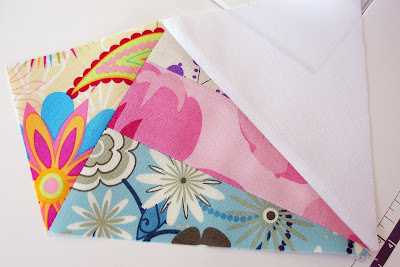 I must admit that I yelled 'ownage' in my head when I finished the first of two blocks for Audrie. It was like I completed the super hard mario kart Rainbow Bridge. Several of our fellow Bee Beautiful mates had little love for this block. Being totally late and having heard all the comments so far, I was a bit intimidated when I started. 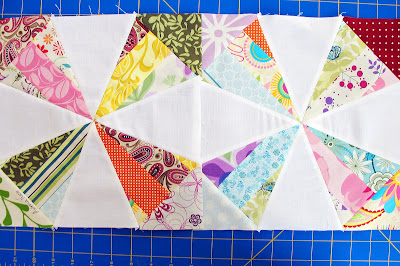 They went together fairly well! I was thinking it over, and I think I figured out why the several bias edges and bulky joins weren't too bad for me. I always press open seams, pin a good amount, and don't pay attention to fabric grain when cutting my pieces. I must be used to dealing with wonky bias issues since I often cut my pieces based on how I want the print to lay, rather than along the grain lines. 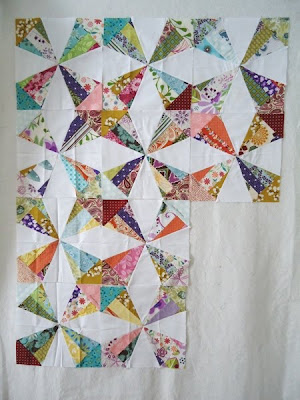 No matter how many times the seam ripper had to be used though, everybody agrees that Audrie is going to have an amazing quilt in the end, and we all love her! So it's all good.
(I swiped her group photo here)
Posted by Angela Nash at 10:59 AM

Very cool blocks, looks difficult and time consuming though. Love the white with the mixtures of color.

so...i think that being 28, I'm all down with the youngins still... however, I'm increasingly becoming aware that I can no longer relate to anyone under the age of 20 anymore. Case in point - ownage?? BTW - I have ownage over Rainbow Road (at least the Wii version of the game) in my household, so I get your pride in that accomplishment! AND - those blocks look great!

I actually enjoyed making those blocks, although I don't think I'd ever make a whole quilt. And ownage is definitely better then beast, that's just weird :)

LOL @ ownage.. I've never heard that one. Then again I have near zero contact with teenagers these days.

Looove my blocks! Thanks Angela! I'm glad they didn't give you grief :)

Those are cool blocks! I don't think I'd have time to tinker with them, but it's going to make one spectacular quilt!!

it is always so amazing to see the blocks come together to make an amazing top....they look so different alone and then together.

this quilt is as unique as Audrie herself and she is a beautiful soul!

love the blocks! I let the fabric tell me where to cut it and don't pay attention to "rules" either. lol

What great blocks! I really like the quilt as it comes together. I love the MarioKart rainbow bridge and handle it better than most in my family but I lacked the right exclamation. Now I have it, thanks!!! Too funny!

Pownage!!!!
Yeah, this one is coming for you. IN the future, try Urban Dictionary.com for all your slang needs. I'll try to remember to ring mine to the quilt guild meeting on the 16th!♥

oops, I mean BRING mine, as in my urban dictionary, to the meeting.
c u then!!

very, very nice work Angela! ok, so what's the deal with "ownage"? what does it mean? ummm, no kids here and I'm in my thirties....

I love it. The word, the blocks, the fact that you co-opted the word for quilting, of all things...

Audrie was so smart to outsource these blocks! Yours look great!

I would never ever say something like "gag me with a spoon" :)

oh my goodness! Audrie's quilt is going to be super duper lovely!